The abbey church of Saint-Étienne is part of the Abbaye aux Hommes (the Men’s Abbey). The abbey is a former Benedictine monastery in Caen in Normandy and dedicated to Saint Stephen. It was founded in 1063 by William the Conqueror and has one of the largest Romanesque churches in France. 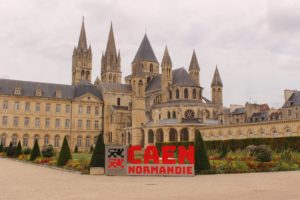 Having founded the abbey in 1063, building began in 1065/1066. It was almost complete in 1077 and therefore was consecrated that year on 13th September in William’s presence. Only the last two bays of the nave and the West façade with its two towers were still to be built. These additional features were completed in 1090.

William chose Caen as he wanted to make the town the capital of the Duchy of Normandy. The building work was rapid due to funding received following the Battle of Hastings as well as readily available materials such as Caen stone and wood.

The size of the church is incredible and it has the grandeur of a cathedral. It measures 110 meters long and over 42 meters wide at the transept. The North tower is the tallest at 82 meters. 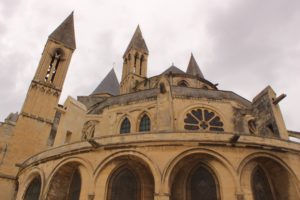 The Romanesque nave dates from the 11th and 13th centuries. An important ribbed vault featured was added in about 1120, and was the first time it had been used in France. This abbey, together with the nearby Abbaye Aux Dames, is considered to be a forerunner of the Gothic style. The original Romanesque apse was replaced in 1166 by an early Gothic chevet, complete with rosette windows and flying buttresses. Nine towers and spires were added in the 13th century. The choir was rebuilt in the thirteenth century in a Gothic style.

Architectural details of note include the galleries on the first and second levels: the Halbout Chapel; the clock in the North transept gallery installed in 1744; the grand organ made in 1744; the lantern tower; and the rail surrounding the choir. 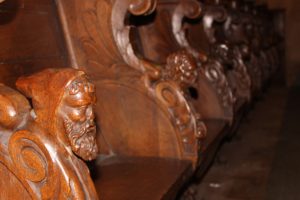 The high lantern tower in the middle of the church collapsed during the Wars of Religion and was never rebuilt. During the French Revolution the abbey church became a parish church.

From 1804 to 1961 the abbey buildings accommodated a prestigious high school, the Lycée Malherbe. During the Normandy Landings, inhabitants of Caen found refuge in the church. The Allies were made aware of this and a red cross made from a sheet was place of the rooftop. This showed that it was a hospital and a safe haven. As a result the abbey church was not not destroyed during the bombings which took place in July 1944. The nearby church of Saint-Étienne-le-Vieux was damaged and remains in its ruined state today.

The Tomb of William the Conqueror

William’s wife Matilda died in 1083 and was buried in the Abbaye aux Dames in Caen. In 1087 William died in Rouen and his body was sent to Caen to be buried in the abbey church as he had requested. When William commissioned the abbey church to be built, he had already decided that it was to be his mausoleum.

The tomb has been disturbed several times since 1087. The first time in 1522 when the grave was opened by envoys from Rome. In 1562, during the French Wars of Religion, the grave was again opened. William’s bones were scattered and lost, with the exception of one thigh bone. This single relic was reburied in 1642. A further destruction of the tomb happened during the French Revolution. The current white marble marker replaced it in the early 19th century. You can see the marble stone in the choir today. It is inscribed in Latin with the words ‘Here is buried the invincible William the Conqueror, King of England and Duke of Normandy; founder of this house, who died in the year 1087.’ 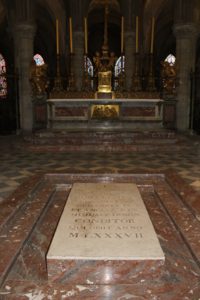 After a series of disasters, the monks of Saint Maur took over the abbey in the late 17th century and decided to rebuild all of the abbey buildings. The Abbaye-aux-Hommes became the City Hall (Le Mairie) in 1963. You can take a paid tour of this 18th-century building. For more information about tours of the abbey visit this site. 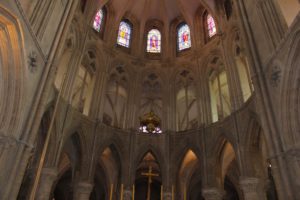 See the video below for a view of the interior of the abbey church.

William The Conqueror And His Abbey Church