On Sunday 11th November, towns and villages throughout France will be commemorating Armistice Day and the centenary of the end of the First World War. Armistice Day is a public holiday in France each year – irrespective of the day of the week  it falls on. This differs to the UK, for example, where Remembrance Sunday is commemorated on the Sunday closest to 11th November.

Tomorrow, there will be services and parades and thousands of church bells will ring for 11 minutes at 11am.

A local craft shop in my local town of Gavray has created a window display of textile poppies and cornflowers. They’ll be on display throughout November and have generated a lot of interest from passers-by. The shop is called Cadeau Craft and is located in Rue de la Libération.

But why have cornflowers been included? 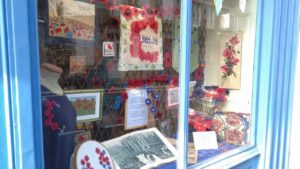 Bleuets (the French word for cornflowers) are the symbol of remembrance and solidarity for veterans and those killed in wars. So the UK has poppies, France has les bleuets. The poem below was written in 1916 and is thought to have been inspired by the blue uniforms worn by French soldiers in the First World War.

These here, these little “Bleuets”

These Bleuets the color of the sky,

Because they are not afraid.

Go on, my friends, so long!

Good luck for you, little “blues”

Little “bleuets,” you are our hope! 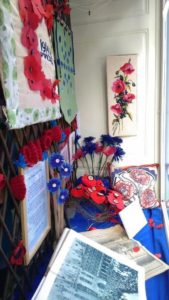 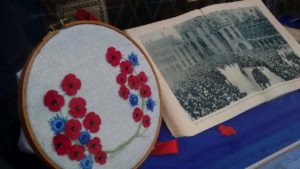 As well as the window display and the church bells, there’ll be events throughout Normandy and the rest of France commemorating Armistice Day. Lest we forget.

What’s On In Coutances Cathedral