There are two exhibitions in Villedieu-les-Poêles happening right now.

The first exhibition is in the Tourist Office and is called Souvenirs de nos campagnes (Memories of our campaigns). It’s a tribute to the soldiers of World War 2 who liberated Normandy towns and villages after D-Day.

The exhibition is the work of Monsieur Gabriel Bossard who is a private collector. Among the memorabilia are a uniform from a French soldier and an American one. Also included are everyday items such as toiletries, rations, first aid kits, toiletries and even a French/English phrase book. Descriptions for the display items are in French and English.

There are also photos of Hambye, Percy and Villedieu after D-Day.

It’s free and is only on until Friday 28th June but is well worth going to see. The tourist office is in La Place des Costils in Villedieu-les-Poêles. Their website is here.

The second exhibition is called 1944 – 2019 and commemorates the 75th anniversary of D-Day and the liberation of Villedieu. It’s an outdoor exhibition in the Jardin des Lavoirs. The garden is on the rue des Quais by the river Sienne. 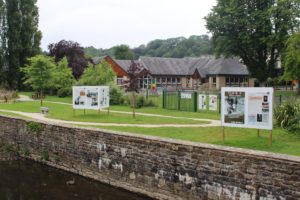 Panels written in French give an overview of these two events and are illustrated with black and white photographs. Villedieu-les-Poêles was liberated on 2nd August 1944. The exhibition is also free and runs until 2nd September.

There’s also a display on the steps of the Mairie (town hall) to commemorate Villedieu’s liberation. What a fabulous display! These two exhibitions in Villedieu-les-Poêles are definitely worth taking a look at. 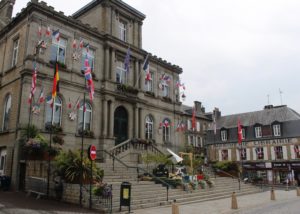