La Pointe du Hoc is a headland in Saint-Pierre-du-Mont in the Calvados region of Normandy. It’s set between Omaha and Utah beaches and was a German fortified stronghold protecting 6 artillery guns (155mm) during WW2. Men from the United States 2nd Ranger Battalion were tasked with scaling the 100ft cliffs, disarming the guns and advancing inland. Their training for the cliff assault had taken place on the Isle of Wight in the UK.

Boards around the site tell the stories of some of the 225 soldiers who started this mission on 6 June. As you read what happened to them and learn about the challenges of the battle, you soon realise why only 90 were left after 2 days of heavy fighting. Although weather conditions had improved, by the time they reached the bottom of the cliffs two craft, supplies, stores and around half the men had already been lost. 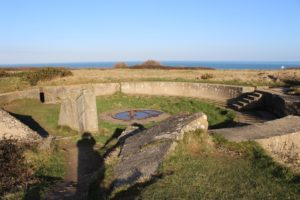 If you start your tour in the Visitor Centre you can pick up a map showing the various bunkers, casemates and gun emplacements. The information leaflet is here.

The film below can also be watched here; it’s called Stories from La Pointe du Hoc and is interviews with American veterans who fought the battle. It’s incredibly emotional and I sat blinking back the tears listening to their words.

I didn’t know much about Pointe du Hoc previously but as I walked around the site it became very real. The ground still bears the battle scars with craters stretching across the whole area. And the Ranger Monument of a granite dagger built on top of the observation bunker serves as a reminder of the ultimate sacrifice these men made. The cliffs that they scaled with rope ladders whilst under fire are sheer and you wonder how on earth they managed to get to the top. The focus of their mission was the artillery guns focussed on Omaha and Utah beaches. These had been removed several days earlier but the ranger troops advanced and found five of them hidden behind hedgerows. They destroyed them and were able to hold on fighting for two days until they were relieved by the 5th Ranger Battalion. Destroying such a key part of the Atlantic Wall contributed to the success of D-Day. 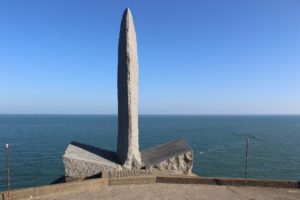 The assault and capture of the site is featured in the film The Longest Day (1962). In 1979 the 13 hectare field was transferred to American control through the American Battle Monuments Commission. They are responsible for maintaining it, the security point and welcome desk at the Visitor Centre. Their website gives opening hours, a map of how to get there and safety information about keeping to the paths.

La Pointe du Hoc is an incredibly poignant D-D site to visit but an absolute privilege to learn about the boys and men who became heroes in 1944. For an overview of the site, the drone footage below shows the extent of the battlefield.

Arromanches-les-bains and the role it played in D-Day