Let me take you on a tour of my favourite fortified chateu in Pirou. It was originally built out of wood on an island surrounded by three moats and five defensive gates in the 11th century. The stone version that stands today was built in 1146. I passed through the first three gates in quick succession.

The first gate is a short walk from a small car park. 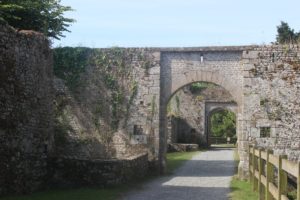 The second gate is in the shape of a square tower and has thick wooden doors. This was the main guard room. 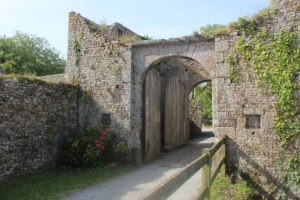 The third gate has now disappeared but as I walked through where it would have been I got a very good view of the rear of the chateau surrounded by the moat. 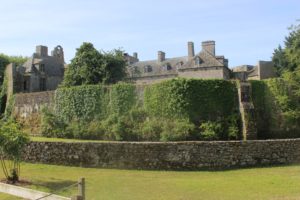 The building to the left houses the ticket office and shop as well as private quarters. The building is called ‘La Bergerie’ which was added in the 18th century. I was greeted by a very helpful man and we chatted about the chateau’s benefactor. Abbot Marcel Lelégard bought both the chateau at Pirou and the abbey at Lucerne in 1966. They both now belong to a Foundation responsible for continuing the restoration work. I was given a set of laminated information sheets which are available in English and French. The map shows the key buildings and I headed off to explore.

The fourth gate has a wide carriage entrance decorated with Richard the Lion Heart’s coat of arms. A smaller gate sits to the right off it and takes you to a path shaded by plane trees. 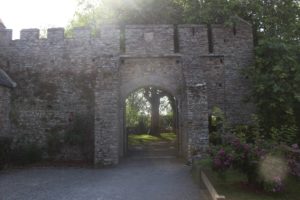 I walked past a stele dedicated the Abbot lelégard, the bakery and the cider press. This is Normandy after all, and there would have been a plentiful supply of apples. 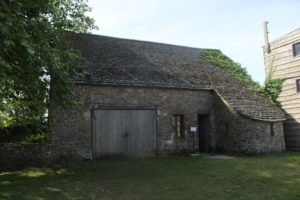 The fifth gate would have been between these two buildings which date from the 18th century. These outer buildings were added for practical reasons as the castle became a farm but it fell into decline during the 19th century.

I had now a really good view of the front of the chateau and the sole remaining turret. 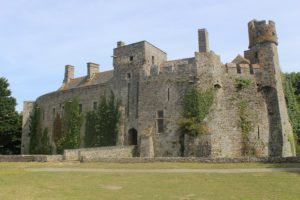 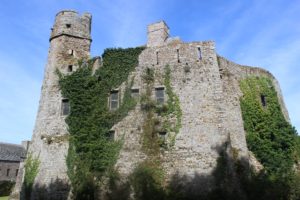 However, there were more buildings to explore first – Saint Lawrence’s Chapel, the Court Room and the old stables. The chapel has been completely restored and has a magnificent wooden arched ceiling which resembles a boat hull. The same style is used in the refectory at Lucerne abbey. The Court Room was where the chateau’s lord would levy taxes and give judgement on disputes. It has been completely restored and is home to the Pirou Tapestry. The tapestry is the work of Thérèse Ozenne and is a humerous account of the conquest of southern Italy and Sicily by the Normans who came from the Cotentin area of Normandy. The tapestry is created in a similar style to the Bayeux Tapestry and both are embroideries rather than tapestries. Madame Ozenne started the historical artwork in 1976 and finished it in 1992. The majority of it is hung high on the walls but some of it is at eye level in a glass case. The detail is amazing – so intricate and the similarity in style to Bayeux is inspired. 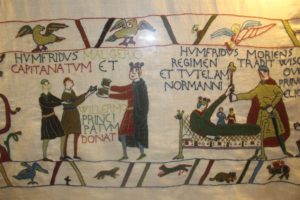 Finally I went into the chateau and crossed the stone bridge which replaces the drawbridge. The slots in the stone where the drawbridge would have been raised and lowered can still be seen. This took me into the Inner Courtyard where there are two distinct parts. The Old Lodge was built at the time of Henry IV and is the first part of the castle to be restored. Three rooms can be visited here. The second part is the New Lodge which was built in 1708. It has been restored on the outside and was inhabited by farmers until 1968.

The first room I visited was the Guard Room which was a bakery prior to the 16th century. A huge fireplace dominates the room and two bread ovens remain. Next was the dining room which is on the first floor. The room has been restored has as the oak staircase leading to it. The next level is cordonned off and you can see the restoration project is still not finished. I went back down to the ground level and into the kitchen which is near to a large well.

At the far end of the Old Lodge is a doorway which took me up to the ramparts. Navigating the circular stone and wooden staircase was worth it to see the roof, the lichen, walls decorated with shells and the views. I had an even better view from the 15th century square tower. You have to climb a rather worn stone and slate narrow staircase and a further very steep wooden one. It’s not for the faint-hearted and you need to watch your head and your footing. I looked out towards the sea and imagined the guards watching out for trading boats or enemies in times gone by. Back down on the ramparts, I then walked along until I reached the 17th century tower and went down the staircase into the inner courtyard. 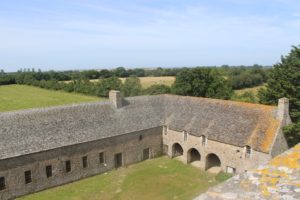 It was then time to re-trace my steps and head back over the bridge and return to the visitor centre for another chat with the man in the ticket office and his wife. Hold onto your ticket and you can get a discounted entry at Lucerne abbey which is around an hour south of Pirou. You can also buy your ticket at Lucerne and get a reduced entry at Pirou chateau.

The website is www.chateau-pirou.org. Pirou chateau is closed on Tuesdays and also on 25th December and 1st January. It’s open from 31 March to 30 September and again for the holiday periods of 20th October to 4th November and 22nd December to 6th January. The tapestry exhibition is open from now until 30 September.

I really enjoyed my visit to Pirou chateau. It was peaceful and quiet and the printed information sheets allowed me to go at my own pace and explore what I wanted. I really got a sense of how the castle was in previous centuries and would thoroughly recommend a walk back in time. It’s incredibly that it has survived and the restoration will allow many more generations to enjoy it.

You can see a video of the exterior of the castle here.

The Chateau at Pirou

The Ultimate Hiking Guide In and Around Coutances

A Self Guided Walk Around Coutances